On a global scale

Aluminium is relatively young for the amount it is used, as its usage only began in the middle of the 19th century. In the period between 1854 and 1890, only about 200 tonnes of aluminium was produced, equivalent to the weight of a hundred F-150 pick-ups with an entire aluminium body, which nowadays Ford produces every 30 minutes.

After the invention of the industrial electrochemical form of production, the release and use of aluminium began to grow exponentially.

This dynamic has persisted in the last ten years, and in 2015, production exceeded 58 mln tonnes. This is predicted to reach 60 mln tonnes in 2016.

This rapid increase was due to developments in technology for aluminium production on the one hand, and on the other hand, the growing number of areas where aluminium is used. Industrialisation, urbanisation, technological advances – aluminium has become an integral part of these processes. Nowadays, the high levels of aluminium consumption in terms of ‘kilogram per capita” is recognised by economists as one of the clear indicators of a strong and developing economy.

On a global scale, the per capita consumption of aluminium in 2015 is estimated to be 7.7kg. It is expected that in 2020 this indicator will reach up to 9kg.

The dynamics of per capita consumption of primary aluminium.

The highest level of aluminium consumption is currently seen in countries with a highly-developed automotive industry, such as, for example, Germany or South Korea. The level of per capita consumption there exceeds 26kg a year, in contrast with the U.S, Sweden, Japan, the UAE and China, where this figure is between 15 and 16kg a year.

The role of China in the global aluminium market is especially worth noting. In the last ten years, China’s economy has grown at a phenomenal rate, becoming one of the world’s main producers and consumers of aluminium. In the last 20 years, primary aluminium production output in China, and more importantly the consumption of this aluminium by processing facilities grew 22 times!

China now accounts for over half of all global production and consumption of aluminium, no other country comes close in this respect. China is exclusively meeting all its demands for primary metals through its own production, thus considering itself separately from the world. At the same time, China is actively expanding exports of aluminium semi-finished products, competing with Western companies in the global market.

In second and third place in terms of aluminium consumption are the European and U.S. markets, where demand is historically very high due to high level of industrial development in these countries’ economies. That said, despite the already well-established high level of aluminium consumption in the US, this market continues to show some of the highest growth rates of transport construction development, expansions of the use of aluminium in construction and electrical engineering.

Another significant market is Japan, a country not only with a developing economy, but also with a huge quantity of technological innovations in the area of electronics and instrument engineering. That said, the Land of the Rising Sun imports the entirety of it required primary metal, and a large amount of aluminium scrap and secondary aluminium alloys, given that the country lacks in its own aluminium production. The reason is due to lack of cheap and powerful sources of electricity.

There is also a constant growth in consumption in developing countries in Asia, largely due to a rapid development of the automotive industry in countries in South-East Asia. However, the highest growth rates in Asia can be seen in India and the Middle East. An active development in aluminium production makes these Gulf countries one of the most influential players in the global aluminium market.

In general, the majority of consumption nowadays comes from transport construction, which comprises more than 26% of all worldwide usage of aluminium. Thereby the highest level of consumption is a characteristic of the most developed world economies. For example, in South Korea, more than 33% of aluminium consumption is used for transport, and in countries of West Europe, this number is over 38%, in the US, more than 40%, and in Japan over 45%.

The structure of worldwide aluminium use by industry in 2015. 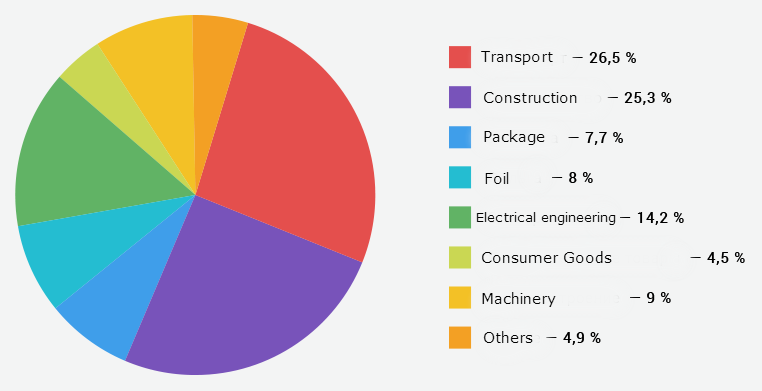 In India, however, the highest amount of aluminium used is in energy and electrical engineering, with more than 36% of all aluminium going to these sectors.